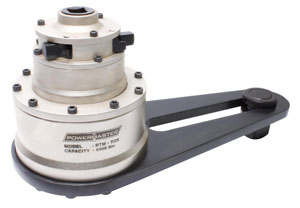 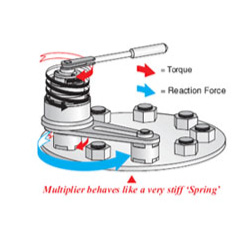 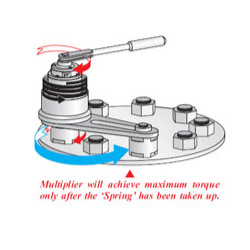 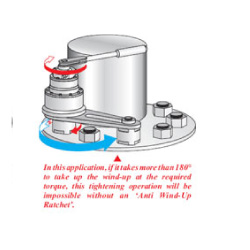 With any high ratio gearbox (25:1 or more) a certain amount of wind-up (spring) has to be taken up before any useful tightening work is applied to the nut.


Each time the input device is released, the wind-up will rotate it back against the direction of operation.

The Anti Wind-Up Ratchet retains all of the wind-up forces as they are created, with the following benefits:

Safety Note: Additional support is recommended as failure in the bolt, socket or multiplier will release the wind-up forces and cause the multiplier to drop. 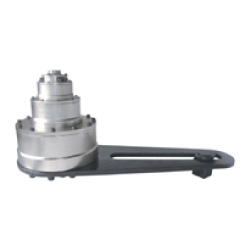 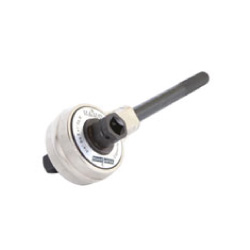 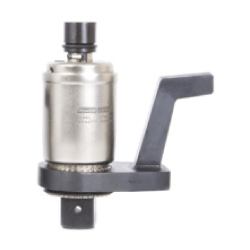 What is a Torque Multipliers?

It is a simple gear box, works on the principle of ‘Epicyclic Gearing’. The given load at the input gets torque multipliers as per the multiplication factor and transmitted at the output, there by with a minimum efforts you achieve greater load.

Why use a Torque Multipliers?

Safety - Use of long levers can be dangerous. Torque Multipliers mean a reduction in the lever length or operator effort by a factor of 5, 25 or 125.

Space Limitation - The use of a long lever may be impossible due to restricted space. 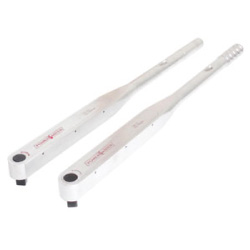